How Wide is a Golf Hole? Golf ball hole size and why?

What is the Size of a Golf Ball Hole, and Why? Everything you need to know...

The size of the golf hole on each green on each world standard golf course is 4.25 inches in diameter. How many times have you taken a putting and wished the hole size on the putting green was only smidge bigger?

One of the most frequently asked questions: How was the golf hole standardized to its current diameter of four and a quarter inches?

Golf is a super exciting sport that tests the golfer’s strength and ability to apply the laws of physics to each swing. It is not as common as all other ball games, but it is just as fun.

What makes golf unique is also how it is played. At a superficial level, we know that it is represented by hitting the ball in the many holes spread across the golf course.

If we try to understand the game at a deeper level, we see that it involves taking into account many factors. You should check variables like slopes along the course, wind speed, wind direction, club weight, and much more. Most importantly, you should also learn about the golf hole, its ideal measurements, and why it was done that way.

We all know that the difficult part of playing golf is getting the ball into the hole. When we look at it from afar, it almost seems too small to include anything. Sometimes the flag flags also stick out, leaving us feeling helpless about winning the game.

In addition to the width of the golf hole, it is also important to consider its depth. Although the depth of the hole may vary from course to course, it is a requirement that they are at least four inches deep. Some golf courses have holes that are about seven inches deep, but that’s as deep as possible.

Now that you know the standard measurements for a golf hole, I am sure you want to know how that came to be. The story dates back to an unlikely event in 1829. During that year, a golf club located in Musselburgh, Scotland, purchased a hole cutter to use on its golf course.

The hole cutter was a simple tool that appears to be made from scrap material or old pipes and was 4.25 inches in diameter. Having the hole cutter meant they could save time digging up holes, while still having identical holes carefully carved on their golf course.

Before that, all golf clubs simply dug holes in the ground. Because of this, there was no standard size for a golf hole, and they often looked like uneven patches sprinkled across the playing field.

However, no other golf club did the same. They did not accept the idea of ​​having 4.25-inch holes for their courses, so they continued with their business and their holes dug.

The Royal & Ancient realized that it would be the ideal size to play golf, so they also adopted it. Since Royal & Ancient is among the most respected golf clubs, the rest of the world followed suit. And even more than a century after the issuance of the new Royal & Ancient rules, it is still considered the standard golf hole size.

So what exactly was the reason behind the adoption of the 4.25-inch golf holes? Other than the fact that the first cutter was 4.25 inches in diameter, no one else knows the exact reason why Royal & Ancient chose to standardize this width.

However, experts believe this is the ideal size for placement purposes. Golfers have to kick when the ball is near or near the putting green that they have to make a calculated stroke to roll it towards the hole. An ideal putt puts the ball into the hole with just one or two strokes.

If the hole is smaller than the standard width, golfers may spend a lot of time on the placement, which can lead to muscle strain. The same is true if the golf hole is shallower than 4 inches.

On the other hand, a much wider hole can take the fun out of golf, while one that is too deep can cause problems for the caddy who takes out the golf balls.

In recent years, golfers have expressed a desire to play golf with larger holes. The names of professional golf players like Gene Sarazen and Jack Nicklaus are often associated with campaigns to increase the width of the golf hole. They believe 8-inch golf holes are more ideal for play than 4.25-inch. However, no official action has yet been taken regarding this proposed change. Until then, we just have to accept the fact that a golf hole is 4.25 inches wide.

According to the Golf Rules, the hole must be 4.25 inches in diameter and a minimum of 4 inches deep. A greenskeeper uses a hole cutter to create a new hole for the green. Push the cutter to the selected location, then pull the tool up, removing a plug of grass and dirt from the green.

The greenskeeper can then smooth the bottom of the hole to make sure the new cup fits properly. The cup, which can be taken from the location of the previous hole, is inserted into the new hole, with the edges of the cup at least 1 inch below the placement surface. White spray paint can be added around the edges of the new hole to make it easier to see. The keeper of the putting green will insert the flag as a final test to ensure that it is upright.

The greenskeeper places the hole cutter in the old hole location and releases the dirt and grass plug removed from the new hole. Additional dirt can be added to the hole if the plug is not flush with the placement surface. To mix the complement with the rest of the green, the greenskeeper can make some very thin holes around the edges of the plug, then step on and surround the plug. Additional water can also be added to help keep the herb in the plug healthy.

Why the holes move

There are two main reasons why golf holes move daily on many courses. First, if the holes did not move, the immediate area around each hole would wear out from constant use. Also, moving the hole locations adds variety to the course. For example, putts on one part of the green can be broken very differently than putts on another part of the green. Additionally, golfers can take very different approach shots to a green depending on the location of the hole. The tee shot strategy on par four and even some par-five holes may also change with different hole locations, because golfers may try to get in position to perform a specific type of approach shot.

Where the holes should move

Golf course architect Jeffrey Brauer says his plans include 24 to 36 hole locations for each green he designs. It divides the green into six areas, including a front, middle, and back section on the left and right sides, and then allows four to six possible hole locations in each quadrant.

Some of the Rules of Golf are verbal, some require reading several times to determine the true meaning, some of the words are extremely accurate, some are subjective, and some are purely factual. This last category is the theme of this week’s blog. A list of sizes, dimensions, times, etc. that are part of the Rules of Golf.

There may be other measures incorporated in the Local Rules. For example, during adverse course conditions, there may be a Local Rule that allows a player to lift his ball, clean it, and place it in a location within a specific area (for example, six inches, a long club, etc.) of and no closer to the hole than where it initially lay.

The reason for that precise diameter is that Royal Musselburgh Golf Club had invented, in 1829, the first known hole cutter. It still exists and is on display at the club and had become the accepted standard for clubs in that part of Scotland, which is the home of golf. It was exactly 4¼ inches, although sadly, no one knows why.

The first golf holes were simply dug with a roughly sized trowel (and the teeing area of ​​the next hole was considered “within the length of a club hole”). But Musselburgh pioneered the standard-size, clean-cut hole, using an object, probably a piece of old drainpipe near the links, that turned out to be that size.

On a larger golf hole, there is an ongoing debate about the merits of a larger hole, which would reduce the emphasis on placement and give more rewards for an accurate approach game.

The legendary Ben Hogan, who suffered a lot from the “yips” in his later years, although arguably the best striker of all time, was a great advocate of this, like Gene Sarazen, he is not prominently featured in no official list. At the time of writing.

How wide is a golf ball?

How do you dig a golf hole?

How many golf balls can fit in a golf hole?

So how big are the golf ball and golf holes? The size of both is regulated in the Rules of Golf by the USGA and R&A. The golf ball has a minimum ground diameter of 1.68 inches but does not have a maximum. Golf balls are made to that specification almost universally.

Stroke Play – A golf format in which the goal is to end the game with the fewest total strokes. Ideal point: the center of the clubface, which will produce the longest shot of a given club.

Why are there 18 holes on a golf course?

Today’s round of golf is 18 holes because this is the number of holes The Old Course at St. Andrews has. In 1764, The Royal and Ancient Golf Club (R&A) decided to reduce the number of holes on the course from 22 to 18. The first account of golf played at Montrose. The course had up to 25 holes.

How often do golf holes move?

When 36 holes are played in one day, it is unusual for hole locations to be changed between rounds, but there is no Rule prohibiting changing them.

How is the cut determined in golf?

The standard cut line for a PGA event after two rounds is the golf score of the 70th professional with the lowest score. Any player who finishes that score or better is considered to have cut and continues to play in the weekend rounds unless the number of players in the tie deserves a further tiebreaker.

Best Golf Clubs for Seniors in 2022

Best Golf Drivers for Seniors in 2022 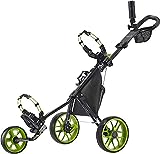